Giardino Ammirato was an initiative looking to collectively re-imagine an abandoned public garden in the city of Lecce, Italy. The garden was part of the original 16th century structure which housed the cultural association Ammirato Culture House and the pedagogical artistic experiment Free Home University (made possible by Musagetes, CA).

The project was born out of the group’s desire to reclaim this forgotten space and collaboratively reinvent it for communal and convivial use. The garden with no name at the crossroads of two streets has been abandoned for years despite its historical, social and environmental value as one of the few green areas in Lecce. Neighbours from the area see it as a problematic space, dirty and unsafe – used only by dogs, their owners and a group of youngsters.

The cultural organization attempted to take care of the garden, but despite their seasonal cleaning and effort to bring their activities into the space, the garden continued going back to its original state of neglect. As part of Constructlab Collective Works helped to make an intervention in the space that would serve as a platform for discussion and action around the future use of the garden, aiming to create synergy that could be carried out and create a sustainable situation in the garden for the future.

A network of local people and initiatives interested in recuperating the garden was developed during an in-situ residency in the months prior to the intervention. Together, we created a cultural program to activate the garden during the summer months, in order to simultaneously open up the cultural centre towards the neighbourhood and to invite individuals to use the garden.

With the motto ‘’ E facciamolo, un giardino!’’ (And, let’s make a garden!) a group of international creatives, local associations and neighbours started an activation period. At first the intervention was an ‘’open-building site’’ inviting individuals from the community to actively join-in the process. This resulted in the construction of a scaffolding-like structure on the inside and the outside of the courtyard, and multiple smaller structures in the garden that opened up the space for new activities. Collective Works transformed the outside of the structure into a dàzibào wall. Insight and local urgencies were translated into unique designs and put on display as conversation starters.

Later on, a variety of actions and workshops such as a the construction of public oven, the planting of a small urban garden, an aperitivo for dogs, reading groups and theatre performances, were carried out bringing life to the space. This inaugurated a program of weekly activities in the garden that took place during the summer months. 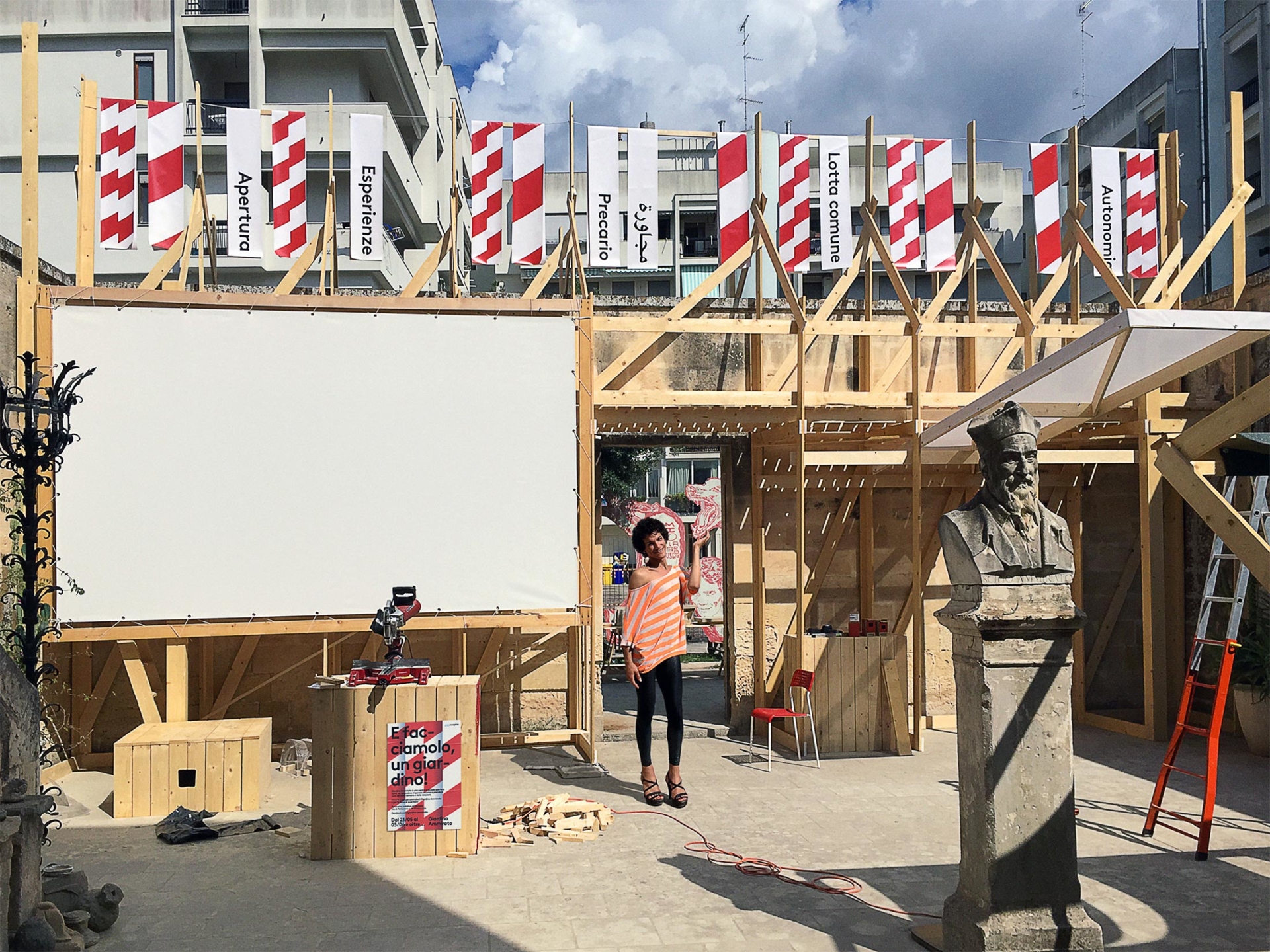 Today is beautiful. It’s spring in the south of Italy. With every day passing the temperature rises. I’ve been here before, years ago. The same cultural initiative, a different group of people, another ‘moment of activation’. When I enter the enclosed courtyard I run into some familiar faces. One of the massive side-doors is opened. You can now directly walk into the neglected park next door. Someone has scribbled “open building site” on a piece of paper. I walk up the stairs and enter the kitchen. A group of people is preparing lunch. I say hi and unsuccessfully try to describe my role as an observer and designer. I ask about the strange green leaves that are being prepared. The cook tells me she is preparing Cicoria. A bitter leave that is loved throughout the region. Every local village has its own aggressive idea on how to prepare this bitter delicacy.

I walk out on the big balcony and a couple of people are sitting in the shade. The conversation is about their desire to communicate. How to explain what is going on behind these fortified walls. Last time I was here the collective aim was to “Start a dialogue with the neighbourhood”. Not much has changed, it is still the idea to co-create, educate, learn and re-appropriate. The intention is always genuine, but once again I ask myself if the gap is breachable?

I use the next couple of days to settle in. I help around, observe, talk with participants, organise bike tours and try to get a feel for what’s going on. A man in the street tells me about this local expression: “Manculicani! Not even the dogs!”, It is used when you are treated badly. “The Puglian dialect goes straight to the hearts of the unprivileged.” he tells me. I run into one of the radical farmers I met years earlier. We talk about the activation of the deserted park and how to grow vegetables in an urban environment. “To make a statement it is crucial to grow without a permit.” the farmer tells me, “It’s the only way to tease the ones in power and force them to speak out.” Later I talk to one of the participants. She wants to “emancipate the local community” and “support others to take risks”. I ask her how she wants to achieve this. Does she know what “emancipation” and “risk taking” mean in the south of Italy? We talk some more about the exotic views of an outsider.

It’s been a week now. I’m picking up pace. My aim is to breach the outside of the fortified walls with a cumulation of voices. A dazibao, a reference from the Chinese Cultural Revolution, a wall filled with posters and slogans that change and grow over time. I start making signs that essentially propose and counter-propose—bold statements, local urgencies, project descriptions, subversive imagery, announcements, small observations and notes. Insights that support or counter the ideas that are developed within this project.

The wall is finished. I don’t know if I’m satisfied. It often takes time to digest. I look at the large amount of signs. As always, the bold statements stand out, but that doesn’t mean too much. The local community is used to strong political rhetoric, the streets are always plastered with political posters. I look closer and a small note with the recipe for Cicoria stands out. All of a sudden I realise that locally, this bitter leaf stands for so much more; it defines home. At the airport, waiting for my plane back home I stumble upon a line written by William Worts Worth: In common things that round us lie, some random truths he can impart, the harvest of a quiet eye. 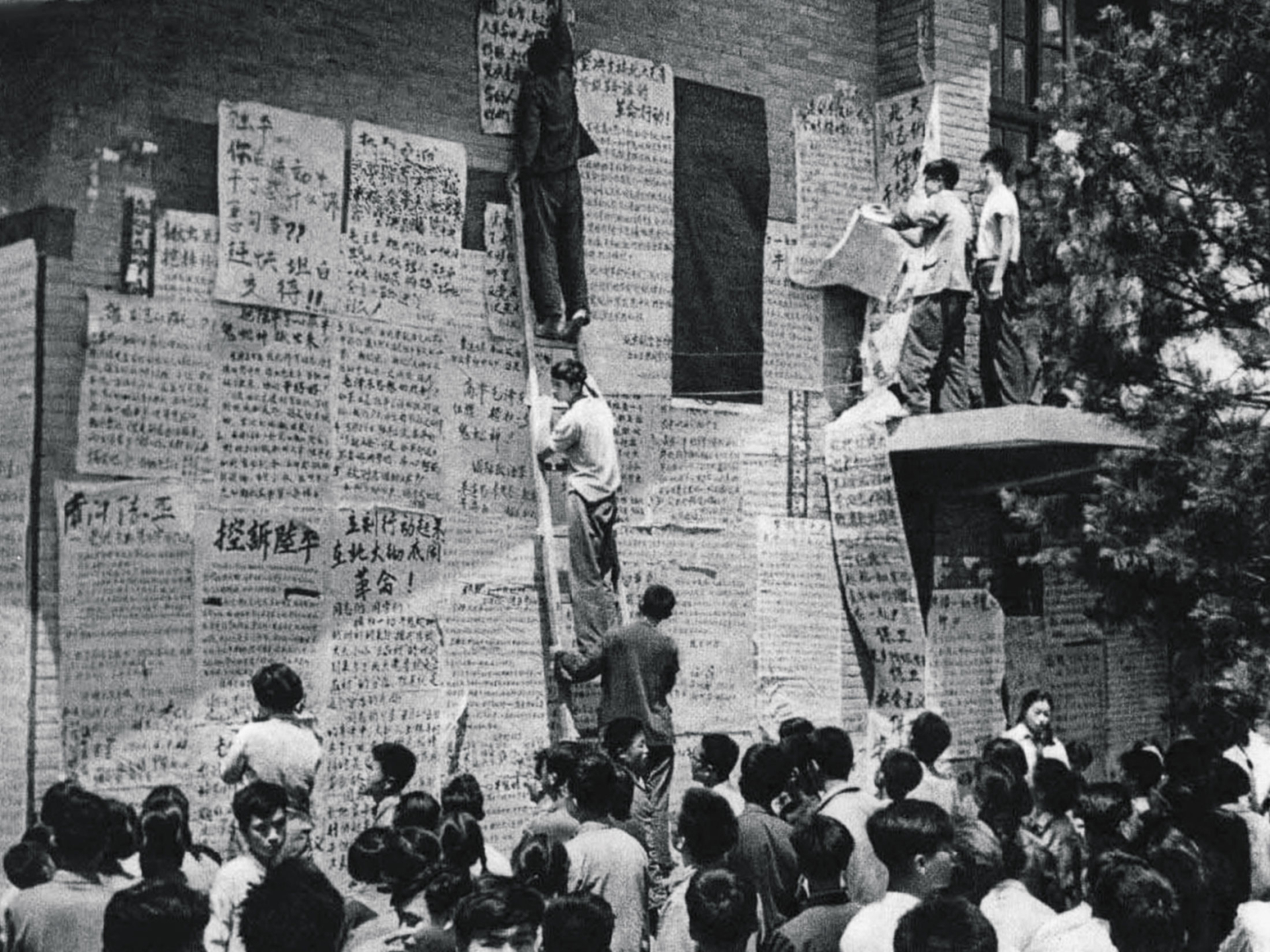 Following the first intervention a grouping of individuals, who participated in the intervention, took care of the garden and organized a program in order to continue living the space and continue inviting neighbours to join the process of living, sharing and taking care of this public garden. After the municipality stopped supporting the initiative (and took back the property) all activities came to an end. The run down property is currently (2022) vacant and the park is (once more) in a state of neglect.